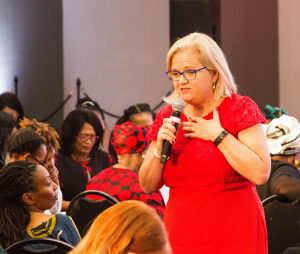 Changing the World One Women at the time by Ingun Bol-de Bock, Founder of the Female Wave of Change (https://femalewaveofchange.com/)

My story starts many years ago. A time in my life when I wanted to be seen, be heard and be noticed.

The funny thing is that I thought the solution was by doing the things that everyone was doing: Getting a good education, getting a great job and starting of my career in the corporate world, buying in big house and 2 cars on the driveway, becoming a mom and trying to juggle private time with a career…Although I was successful, I still had the feeling I did not fit in, people did not see me, did not hear me….felt like the square peg in the round whole!

In 2002, after several burn outs, I decided to quit my job and start my own business. I wanted to be free and put more energy and focus on things that did matter. I discovered step by step who I really was, what my talents are, what I want to bring into the world and started working with people to discover who they were.

One of my blind eyes was on women: being an engineer, successful in sales in the IT industry, resulted in always being in a male environment and building a male network. My eyes openend when I was asked to organize a big event in the Netherlands for the 100th International Women’s Day. I had almost no women in my network so I had to ask for help…and something amazing happened: in 2 months we organized events for 1500 women on 12 different locations. With the help of an amazing team of women volunteers. I loved the energy!

Since that moment I have really been discovering the power and inspiration of women on a global scale.

Everything came together when I founded Female Wave of Change in the beginning of 2017 and everything that has been happening since: The amazing team we have build worldwide, represented right now in almost 35 countries, having a successful women leadership program, organizing our Global Conference in South Africa in September 2019, setting up a fund for women, and so much more!

I found my voice, I stepped into my leadership and now I am changing the world … one woman at a time! I feel free, I feel empowered, I create impact and have time to spend with those people who are most dear to me!

You were never supposed to fit in! You are born to stand out!